Jensen Motor Boat Company was founded by Tony Jensen whose first boat building job in Seattle was at the Moran Ship Yard in 1906. Upon returning to Seattle in 1925, Tony started a new boat building business in the Greenlake area of North Seattle. He rented building space from Miller Aircraft and when he finished his boats he would haul them down to Portage Bay for launching ceremonies.

The property for the Jensen Motorboat Company on Portage Bay was purchased by Tony and Bessie Jensen and two Partners in 1927 and has been in the same location since. Since its founding in the 1920's, Jensen Motor Boat has built hundreds of custom classic wooden boats and rebuilt thousands of others.

In the 1950's, son Anchor Jensen co-designed and built the Slo-mo-shun IV and V. Jensen's Slo-mo-shun IV became the prototype for all hydroplane builders for the next 15 years. In 1950, Slo-mo IV smashed the "World Water Speed Record" and then won the Gold Cup in Detroit and claiming victory for the City of Seattle. This kicked off the incredible string of victories the Slo-mo team would achieve over the next five years with five straight Gold Cup victories, winning the Harmsworth Trophy and breaking the World Record Mile Run again in 1952 with a speed of 178.5 miles per hour.

Anchor, one of the world's greatest resources on wooden-boat technology, owned and managed the Jensen Motor Boat Company for 63 years until his death in 2000. Soon after, Shipwright's Peter Proctor and former Anchor Jensen apprentice Steve Evavold joined Jensen Motor Boat Co. as its management team.

Jensen Motor Boat Co. continues to be dedicated to quality, our customers, our employees and the wooden boat community. The tradition established by Tony and Anchor of mentoring the next generation of wood boat craftsman and owners continues to be a core mission of our General Managers and master Shipwrights Peter and Steve, and the current 3rd & 4th generation owners of the Jensen family. We love wooden boats!

Tony Jensen took his first boat building job, bringing to seattle heritage of Jensen boatbuilders from 100 years before him in Denmark. A Julliard-trained musician, Tony build boats by day, played violin for theaters and symphonies by night.

The Jensens moved back to seattle and lived abroad "Tony Boy". First chair and concert master with the seattle symphony, as a hobby Tony build cruisers for friends and opened a boat shop in Greenlake, hauling boat down to Lake Union3 miles away.

With wife Bessie, Tony bought 100 feet of waterfront property on Portage Bay, Built the yard and shop with apartment above, and lived and worked there for the rest of his life.

Goerge Jensen, industrial designer and boat designer drew plans for the most modern, streamliner boats of the time, and Anchor built it. 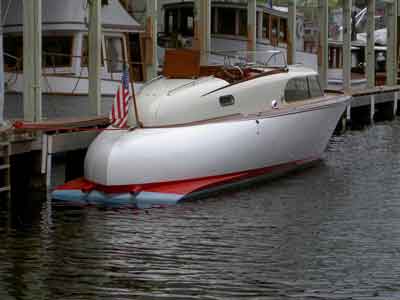 The pride of seattle, the slo~mo legend of the worlds fastest boats captured hearts and changed hydroplane history. Winning 3 gold cups brought the race to seattle and a reign of victory for owner Stan Sayer; the Harmsworth Trophy put Seattle on the map as home of unlimited hydroplane racing. Designed and built by Anchor; on display at the museum of History and Industry. 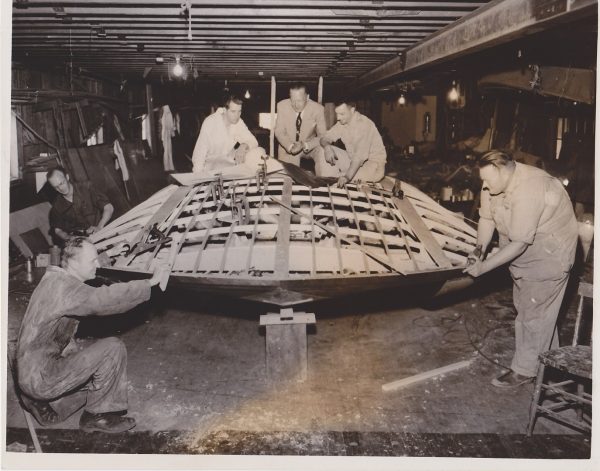